Jewellery professionals reflect on the term contemporary jewellery, what it stands for, its value and how it is understood and often misunderstood. 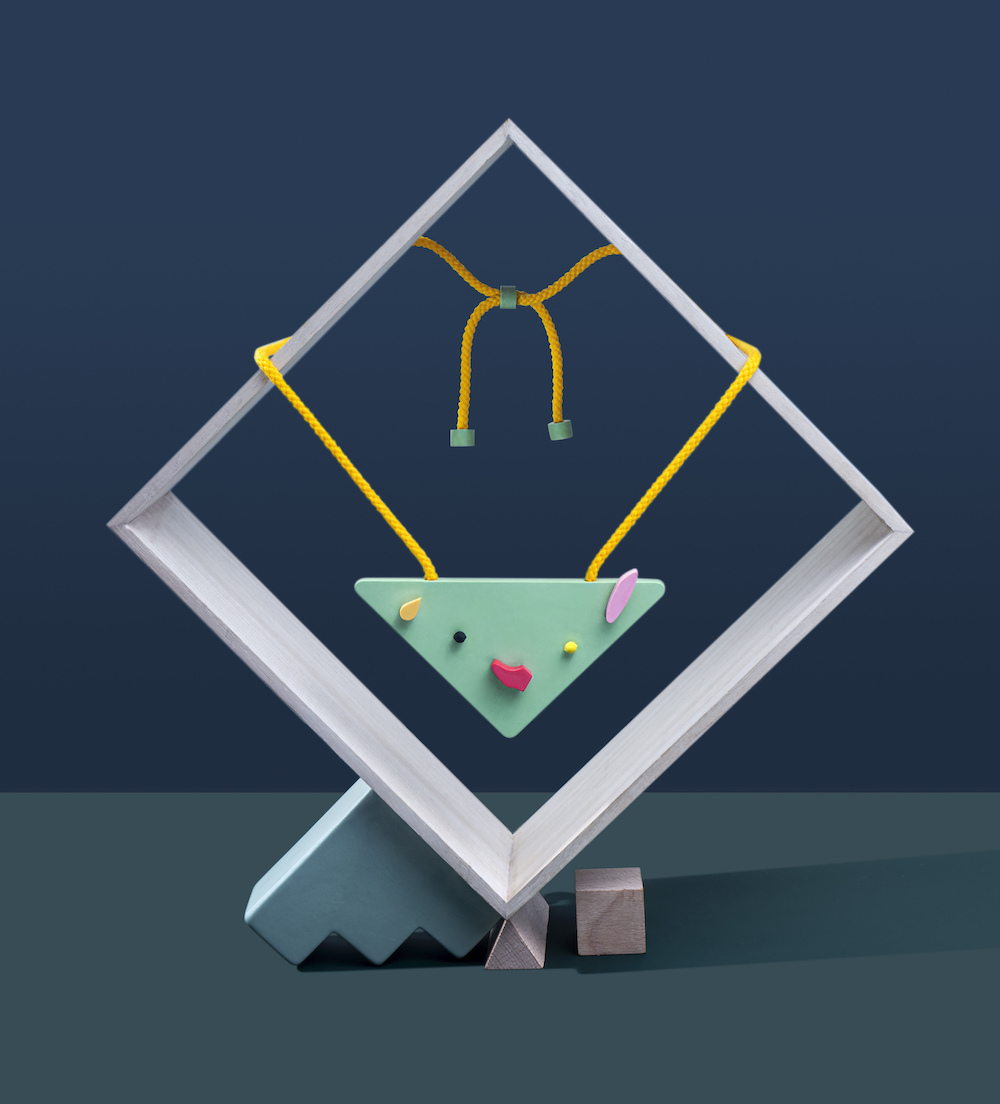 At FAD, we believe that revaluing and redefining creative disciplines is an essential exercise not only for their development but for bringing the public closer to considerations beyond the labels to which they are sometimes reduced. FAD associations, through their boards and the activities and awards they organize, are tools to convey these reflections and make them circulate at the same time they evolve.

Recently, the A-FAD board found itself reflecting on the concept of contemporary jewellery, to which it annually dedicates the Enjoia’t Awards and various activities as part of Barcelona’s jewellery week. Therefore, we wanted to expand the conversation that began and revise the term through the opinions of four professionals in the sector belonging to different generations: Laia Adsuara, Amador Bertomeu, Ramón Puig Cuyàs and Mònica Gaspar. From their contributions, we highlight seven important considerations around contemporary jewellery.

Amador Bertomeu, founder and director of art and technology at the contemporary jewellery platform Klimt02, defines the term as follows:

“Contemporary jewellery is jewellery that uses contemporary artistic language, in the same way that painting, sculpture and other artistic disciplines can do. And we can observe this language on different levels: conceptual, material and technical. Contemporary artistic language is the set of codes that are integrated to generate a work, a piece, an artwork. Artistic language generates its paradigms and anomalies, makes use of a certain irony, a certain symbolism, gives a certain meaning to tradition, recovers certain affinities of history… makes friends and enemies. Part of contemporary jewellery is dedicated to dismantling and deconstructing a certain traditional use and format of jewellery (ostentatiousness, voluptuousness, social status, etc.). But ultimately the artistic value in certain works of certain authors has great creative value, absolutely comparable to other artistic disciplines. ”

Concreteness, relationship with the body and appreciation of contemporary jewellery

The concreteness of contemporary jewellery and its relationship with the body are often seen as ‘handicaps’ and ‘limitations’, but for Amador Bertomeu these are characteristics that make it very special.

Regarding the appreciation of the discipline by society, the director of Klimt identifies the cultural background of each one as a key element:

“Fortunately, all artistic disciplines have a very wide spectrum of use. We can like an abstract painting and at the same time not be interested at all in a figurative painting, or vice versa. I appreciate a brooch in the same way as a canvas, I appreciate a ring in the same way as an object, I appreciate a bowl of urushi in the same way as graffiti on the wall… If the code it transmits reaches me, it interests me and especially if I am able to understand it. Sometimes there is no language, code, informative capsule on the part of the sender (artist), but many times, what is missing is the ability to understand the language on the part of the receiver. Many times, I don’t like it means I don’t understand it. The more cultural background you have, the more possibilities of understanding and getting excited you will have, and likewise, more chances to dismiss what does not contribute much, what is only noise.”

As Mónica Gaspar, Senior Lecturer of Design Theory at the HSLU, School of Art and Design in Lucerne (Switzerland) recalls, when it comes to contemporary jewellery, the adjective contemporary does not refer to the fact that it was produced in the present, since there is jewellery made in the present that is not contemporary. Contemporary refers to a conceptual attitude, linked to art:

“I understand contemporary jewellery as an attitude and a territory where to question and celebrate the innate human need to build and communicate our identity through objects worn on the body as an ornament. As a highly specialised environment, contemporary jewellery has a series of platforms
and people who produce, mediate and regenerate it: schools, galleries, professional fairs, museums, companies, publications and collectors among others. The term “contemporary” does not refer to the chronological moment in which it exists: not all jewellery made here and now is contemporary. This adjective is intended to suggest a conceptual attitude, normally associated with art, in which making jewellery involves both an element of personal expression and a questioning of what a jewel can be, on a formal and material level and in terms of its use and meaning. The value that I most
appreciate in contemporary jewellery is its tireless capacity to remind us of the emotional, social and ecological impact of bringing matter loaded with meaning in touch with our skin.”

Over time, the denomination has become too vague

Perhaps due to the consideration made above, contemporary jewellery is often understood as any piece made in the present, and this has made the differential value of contemporary jewellery – its ability to innovate, project and even disrupt – as the jeweller Ramon Puig Cuyàs recalls, become more blurred or reduced to a small number of works:

“Today this denomination has totally lost its capacity for definition and has become a kind of wild card to define any production in the territory of jewellery, very similar to what happened to the word design. It bores me deeply and it produces an attitude of prevention every time I hear or read “contemporary jewellery.” In principle, the adjective contemporary means something that is linked and is consistent with the culture and aesthetics of its time. But as soon as this adjective applies to artistic and cultural productions, it is assumed that in addition, it must have a will to disrupt, innovate, and project towards a new future reality, which is to say that in a certain way it is the vanguard of something new, that is ahead to contemporaneity. The reality, for me, is that most of this so-called “contemporary jewellery” does not fulfil this desire for innovation. I find it simply decorative, repetitive, and utterly banal, and very few creations have the capacity to excite and stimulate me intellectually.”

Ramon Puig Cuyàs highlights two values  which are absolutely relevant for the present moment and ​ often go unnoticed in the appreciation of jewellery conceived with an artistic will:

“It is difficult for me to define the values ​​of contemporary jewellery because this concept today brings together such a diverse variety of attitudes that it is impossible to generalize. But if a jewel is made and conceived with an artistic will, it will share all and each one of the universal values ​​of art, without any difference due to the means used (or the dimension) when materializing the artistic act. Perhaps one of the values ​​that I would highlight would be the ability to bring art closer to the daily life of people with a will to democratize, remove art from museum temples and put it on the body of the users-carriers. Another value that should be more taken into account is its ability to endure in a world dominated by programmed obsolescence and the consumption of ephemeral goods.

Nevertheless, for the vast majority of people, both in the world of Art and for ordinary people, “jewellery”, being accompanied by whatever adjective we want, has always been associated with luxury, fashion, glamour and vanity. And even though there are people who have been fighting for more than half a century to destroy this stereotype, we have not been able to achieve it. It has not been possible to provoke the complicity and interest of other institutions and social actors towards the phenomenon of the new redefined jewellery. “Contemporary” jewellery remains a restricted and endogamous affair, on the periphery of the cultural world, which is already peripheral in itself, and absolutely invisible to the rest of society. ”

It is difficult for applied arts to be understood as art

Laia Adsuara, the jeweller behind the Adsuara Nadeu brand, believes that contemporary jewellery, conceived with an artistic rather than functional will, lies in a middle ground that has affected its representation. Although it comes from the applied arts, it is closer to contemporary art, but not enough attention is paid to it in this area:

“For me, contemporary jewellery is one that sees the jewel as an artistic work. And therefore sees the jeweller as an artist, who goes from being a craftsman to deciding on the concept, the form and what he wants to convey through the jewel. Being a jewel, his work is related to the human body and should end up being worn. But the jeweller as an artist has freedom of techniques, materials and concepts when making the jewel. It is a form of expression and depending on what you want to express, this jewel may end up being ephemeral, annoying to wear, a ray of light, or perhaps the object itself ends up disappearing and becoming an audiovisual.

Another interesting consideration around contemporary jewellery, as Laia Adsuara recalls, is the freedom it gives both to the person who creates it and the person who wears it:

“For me, the most important thing is the freedom that the jeweller has becoming an artist, and therefore using the freedom to make a jewel with the materials and techniques conventionally used in jewellery or by applying new materials, investigating new techniques, and above all expressing something through the jewel. The most interesting thing is that since it is a jewel, the ultimate goal is that someone ends up wearing it, and therefore that someone will also transform it in its own way. This bond that is generated between the jewel and the person is something that seems very special to me and that does not happen with other artistic disciplines”.