Eau de Paris and Blue Communities, winners of the City to City’18

The jury considered that both projects are complementary and work towards the same goal: to gain back the collective management of a fundamental resource. 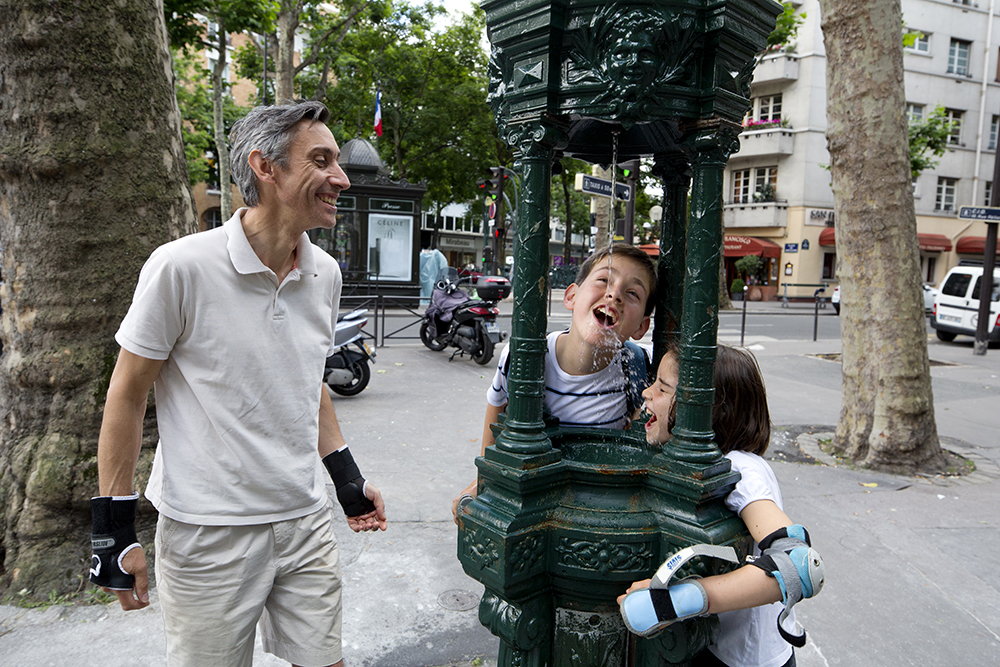 Seventh edition of the City to City Barcelona FAD Award, the FAD project engaged in scouting out and highlighting urban transformation initiatives that are improving city life around the world, a prize that aims to be a platform for connecting cities, projects and people.

After focusing on learning initiatives in 2016, this year’s edition revolves around the multiple and complex relationships between water and city and seeks to open up a very broad debate around this fundamental element for human life, inherent to the very birth of civilization and urban settlements. Several projects have been sought around the world that bring about solutions for coexistence with water – an asset as essential as it is scarce – in cities, at a time when it is more necessary than ever to rethink our responsible use of this resource.

A highly eclectic jury, chaired by Pedro Arrojo, a water economy expert, Goldman Prize winner and promoter of the Foundation for a New Water Culture, and formed by Nani Marquina, Carme Ribas, David Bestué, Joan Gaya, Anna Zahonero, Gabriel Borràs , Narcís Prat, Marta Serra and Maria Rubert de Ventòs, has awarded a joint prize for the first time in the history of the City to City Award as well as two honourable mentions, choosing from 30 shortlisted projects. These had been selected from among 95 candidates drawn from five continents. A wide diversity of candidatures, which included from riverside revitalization processes to projects that make use of new technologies to mitigate the effects of Climate Change to green rooftops, anti-flooding architecture, educational drives on water resources or the recovery of river heritage, to mention some of them.

From the mid-1980s to 2008, several different operators were in charge of the water service in Paris. This fragmentation led to a high level of opacity and very limited responsibility for errors or irregularities in the management of the service. In this context, in 2001 the city decided to tackle this fragmented organization and create its own water operator, putting an end to the privatizations of the service. Eau de Paris was effectively founded in 2008 to take charge of the entire water cycle, from capture to customer service. An operator committed to the general interest, to sustainability and transparency, which also aims to turn Paris and its surroundings into an inclusive, sustainable and resilient territory capable of mitigating the consequences of Climate Change.

An organization with a clear activist vocation, emerged from The Council of Canadians, whose mission is to invite cities to defend common assets through the adoption of local policies that recognize water and sanitation as human rights, prohibit or gradually eliminate the sale of bottled water in municipal facilities and events, and promote water supply and wastewater services financed and managed by the public administration. It emerged in Canada as a strategy to counteract government austerity measures, and since then it has become a tool against neoliberal economic policies and the privatization of public services on a global scale.

Jury’s evaluation:
When awarding the prize, the jury highlighted that the two projects are ascribed to the declaration made by the UN in 2010, pinpointing access to water as a universal human right as well as the 17 sustainable development criteria drafted by the same organization. The jury also appreciated the fact that both projects propose participatory, accessible and transparent management models for common resources. In short, two projects that understand water as a universal right, far removed from any market logic.

Giving the prize to both projects at the same time has to do with their complementarity. On the one hand, Eau de Paris is a public operator which has managed to succeed in one of the largest, most modern and developed cities in the world while also creating a body such as the Paris Water Observatory, which undertakes education and research while disseminating the model of public management and good practices in water resources. On the other, Blue Communities is an activist platform that has gradually extended its influence to other countries, always carrying the flag for re-municipalization and the defence of the public good through practices of direct action and self-organization.

In a sense, Eau de Paris is the institutional side and Blue Communities the civil side of the same movement to recover a fairer and more collective management of a resource that should never fall into the hands of just a few.

The project began with a study based on the camp’s community, through which a map of possible empty spaces was created to introduce improvements in the community. One of the first was a “public square” on one of the roofs, at the Women’s Centre. This place was chosen as a shared space so that during the day the different groups could use it for various activities. Originally, water and its uses had not been contemplated in the project, but it soon became one of the main elements for addressing.

Workshops were held to generate an efficient structure that could collect as much water as possible. When refugees manage to store a sufficient amount of water, which is normally done in propylene water tanks, these often become the target of the Israeli military during confrontations. Therefore, in the projected area a specific place was prepared for the building’s general water tanks to be protected from the shootings, but also accessible for managing them. Furthermore, everything had to be easy to build and replace in case of damage. This maxim became the core of the entire space design. Now, even if there is a shortage of water, the “square” will have this resource available.

Jury’s evaluation:
The jury highlighted that the project was undertaken in an almost warlike context, in which one has to think about access to the most basic resources in another way. In this critical situation, and in a scenario of expulsion, precariousness and overcrowding, the project finds a way to efficiently address the management of resources while empowering the community, also introducing a powerful gender component and putting water at the centre of communal life and the design of the public space.

The city of Cuenca, the capital of Azuay province, is located in the Inter-Andean Region of the Republic of Ecuador; it is naturally divided into three terraces and crossed by four rivers. In 1999 UNESCO listed it as a World Heritage Site.

The Green Belt project, and its integral method, calibrated to the local reality and under execution since 2015, provides comprehensive information on the real state of fluvial ecosystems, helping to implement conservation strategies for water sources that may be suffering from some type of threat that alters its natural state, while also considering which rivers are most deeply affected to propose strategies that improve their condition.

Since its implementation, it has become consolidated as the structural linchpin of its urban growth model and an instrument of sustainable balance between the city’s social, ecological, economic, environmental, landscape, cultural and heritage components, establishing climate change and environmental risk adaptation and mitigation measures and generating a more cohesive society, one involved in the conservation of its environment.

Jury’s evaluation:
The jury highlighted that this is a true example of the successful integration of many fundamental elements in the water cycle from the point of view of environmental sustainability, such as flood prevention, riverbank management, systemic public policies with multiple collaborators, education and involvement of the citizens and in general the maintenance of functional ecosystems around an entire urban river basin.

The prize-giving ceremony will take place in November and the prize-winning entities will be invited. Activities will be organized to connect the award-winning projects with similar initiatives being undertaken in Barcelona.