«In the future, archeology will be about computer science»

We interviewed Mau Morgó, creator of the installation “New domestic landscape, Bcn 2018” located in the Plaza Universitat in the framework of the BDW. 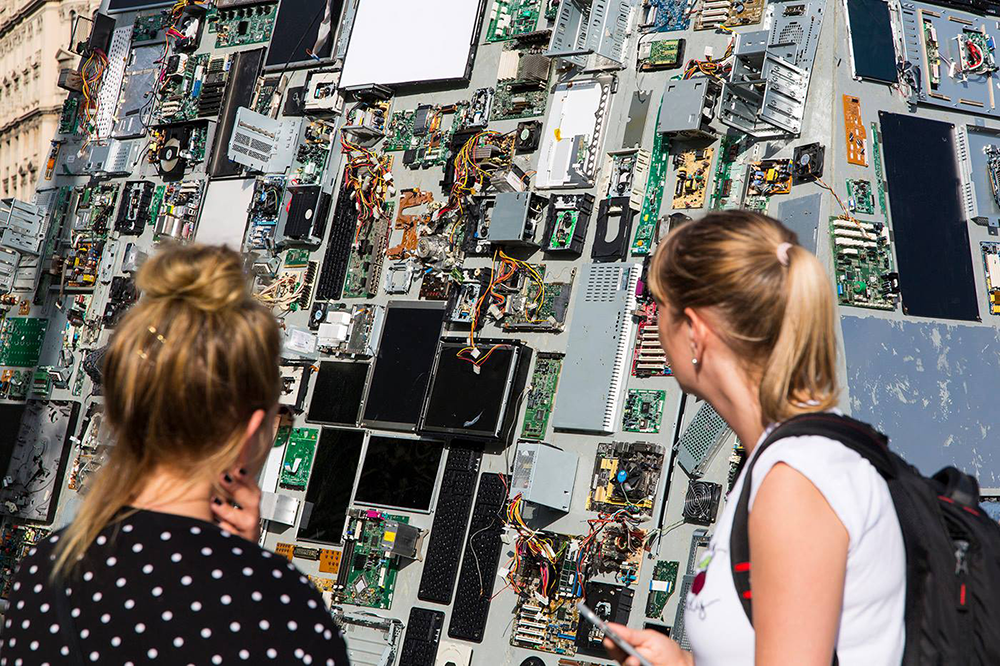 We interviewed Mau Morgó, creator of the installation “New domestic landscape, Bcn 2018” located in the Plaça Universitat in the framework of the Barcelona Design Week.

You have built a refuge with technology to avoid technology, but even so, the public goes in still hooked to their phones!

Yes, it is very paradoxical. At first, I wanted to be more radical so that people couldn’t connect with their mobile phones, laptops, or anything. If you create an enclosed space you can do it. But the subway running below has multiple signal repeaters, so it has proved difficult. I have not succeeded because maybe the technology has not advanced enough to allow us to flee from it. I think there will come a time when we will realize how exposed we are and we will end up covering the house with insulating materials in order to really disconnect.

Is it possible today to find a really isolated place?

Have we lost our privacy? Are we going to need bunkers like this so that we can not be found?

As it has taken time for us to develop renewable energies, it will take us time to recover the right to privacy that technology has violated. A part of the text I wrote about the installation says that a shelter is a place where they can not find you and maybe thanks to that we can find ourselves.

Yes, it seems that the digital world forces us to constantly describe ourselves but in the end, we are describing ourselves or the idea of what we want to be?

Exactly. When you “know” someone via Instagram or Facebook, you see what they are projecting through their social networks and very often you think, what an attractive person! But then you know them and you realize that they have nothing to do with the image they projected.

In the text about the installation, you talk about technological devices as “enemies” with quotation marks, why?

Yes, they are invisible enemies. I call them enemies because obviously there are many good things in technology, it is an incredible tool that has connected us all, but on the other hand, it is also very dangerous. It can be your best friend but also your worst enemy. I personally am trying to have a healthier relationship with technology, make a responsible use of it.

Technology is putting us more at risk than it is protecting us?

Totally. The other day my friend Daniel Armengol Altaió shared a very important question: How much time do we need to realize that the scroll is infinite? We constantly need more, more, more. We are consuming information in a massive way to the point that we are moving away from being human. We look like robots and sometimes classic statues, paralyzed by the effect of technology. That’s why I talk about technology as an invisible enemy, it is an enemy disguised as a friend.

What does the title: New Domestic Landscape. Bcn 2018 refer to?

It makes reference to a mythical exhibition of the MoMA of 1972 that was called “Italy: The New Domestic Landscape”. When I was in the studio Mucho, I worked on a recreation of the exhibition that was presented at the FAD and it left a mark on me. When I started working on this project I remembered that Gaetano Pesce, Archizoom, Superestudio and other designers who participated in this exhibition were thinking about the cities of the future and devising new cities and new domestic landscapes. They wondered how people would live in the future and the idea for the installation comes from this question. Also these last two months I have been working and travelling a bit in Los Angeles and I was very impressed by a street next to the downtown, Skid Row, where people live in tents on the street and it is legal. I saw a person with a computer, another with a play station… It is a huge community that has no home but does not abandon technology and has electricity! This made me think that maybe in the future there will be so much electronic trash that we will not know what to do with it. Then, maybe we’ll start building with it. There is also an interesting issue with mobiles and laptops and that is that we have such an intimate relationship with them… We have fallen in love, we have cried, we have been moved and when they break and it is hard to take! It is difficult to get rid of them.

Do you think that electronic waste will be the building materials of the future?

Yes. Why not? Either we start building with them or we throw them all to a remote planet… But we have to do something or we will end up like Wall-e. The electronic devices are already fossils and in the future, archaeology will be mainly about computer science.

Where did you get this electronic waste from?

It comes from three green points. We made three trips with a van and they still offered me more. There I realized the difficulty of recycling these products well because of the number of components of different materials they contain.

Why did you choose this particular shape?

The shape imitates the archetypal African constructions made with adobe. At first, I wanted to use the waste as if they were bricks, stacking them on top of each other, but by putting them side by side they are more recognisable and give a better idea of the amount of elements that we should be able to recycle.

You’ve been here three days. How do people relate to the installation?

Being here has been very exciting, people have interacted with it a lot. I am originally a graphic designer but I switched to interactive design because it is very interesting to see the impact of your design on people, their reactions. The Plaza Universidad is an ideal space. The most curious thing is that although you tell them that it is a space to protect themselves from technology, people enter with their mobile phones in hand, recording, sharing … They can not get rid of technology for a second! And that is very revealing.

Do you think the installation has made people ask themselves questions about their relationship with technology?

I hope so, it is the intention, but above all I was also very interested in sending a message regarding recycling, and people have asked me a lot about how this is recycled.

“New domestic landscape Bcn 2018” can be visited until 4:00 p.m. on Saturday, June 9 in the Plaza Universidad de Barcelona.