For the love of objects!

A Chronicle of «General Rehearsal: The Rebellion of Objects» an event organised by FAD for Barcelona Design Week. 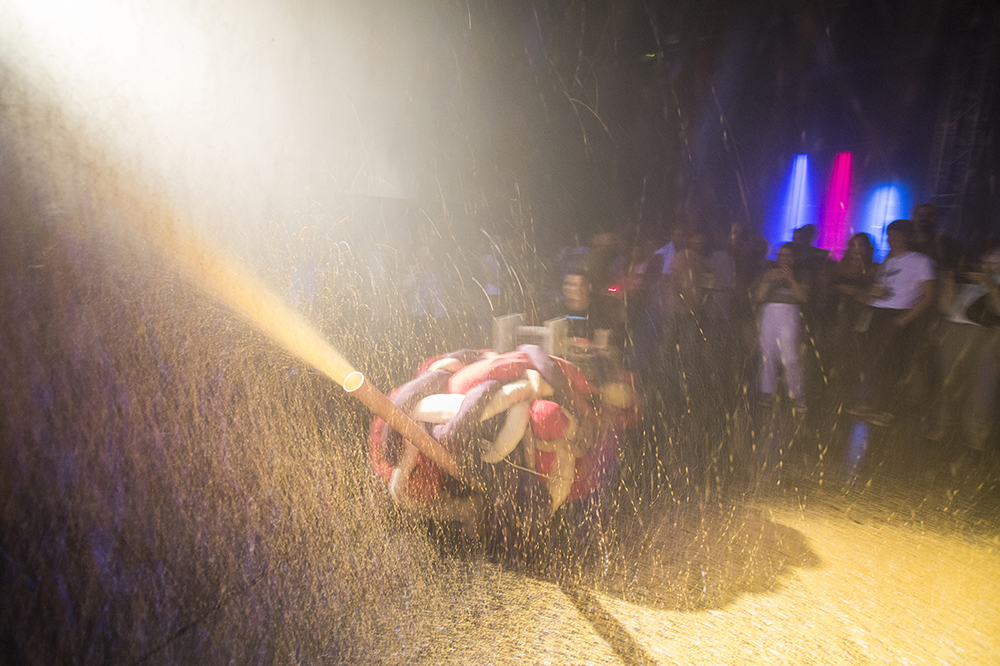 It is almost unquestionable that the consumer society has reduced our emotional bond with objects. In general, we consume more and repair less. We resell more and we reuse less. Except for the increase of our relationship with technological devices -only interrupted by programmed obsolescence-, the throwaway culture begins to be visible in the most inhospitable landscapes of the earth. With this concern in mind, the FAD organized last Saturday «The rebellion of objects», a new edition of the General Rehearsal, a festive event that this year aimed to raise awareness about the possibility of creating new affections with objects and consequently new subjectivities.

On the way to the Hangar, the venue chosen for this edition, I begin to find objects out of context, abandoned to the elements. As I move between one object and the next, I wonder if I’m following the right path or I have ended up by mistake at the entrance of a waste facility. A chair, a door, a jogging machine, a car, a hot air balloon… they all form a path of clues that, arranged by Sociedad 0 like the crumbs of Hansel and Gretel, seem to guide me towards the epicentre of the enigmatic rebellion, awakening my curiosity and forming a disturbing psychogeography. 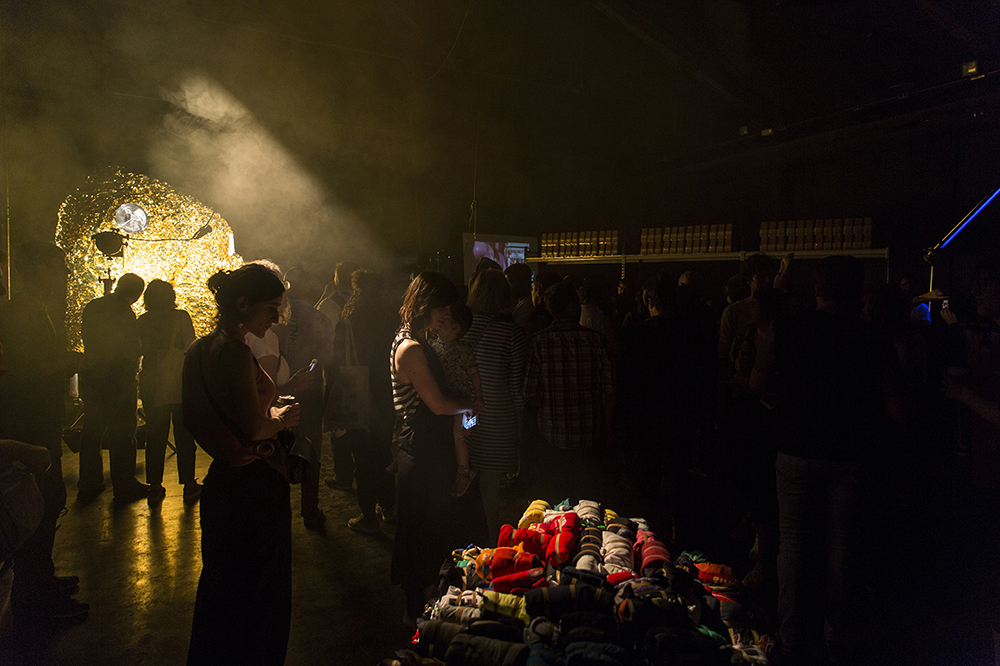 Inside Hangar’s main room, the surrealist drift continues. We are welcomed by a paper shredder machine in the shape of coloured guts, a construction made of T-shirts, a sculpture in the shape of a gold elephant and a dolmen made up of four gigantic potatoes. Some pole dancers dressed in white gauze tunics dance to the rhythm of a remixed electronic music that increases in volume.

As the night progresses, the objects reveal themselves and rebel. Sara de Ubieta wakes up the paper shredding machine: Machine-Muscle. Under her baton, the object ceases its shredding activity and reactivates as a confetti machine, spitting recycled paper and turning the place into a real party. Makeo – the duo formed by Roberto Piqueras and Eme Rock – invites the public to participate in their work Emaús and give a new life to one of the recovered t-shirts that made up the piece. On the wall, Boldtron’s projection Digital Vanitas shows a moving digital sculpture created from found household objects, from furniture to kitchen or desktop utensils. Each object in this rebellion has a history and a message behind it and the scientists of Materfad, hand to hand with the Elisava Research team, help the public discover and interact with it, for the love of objects! 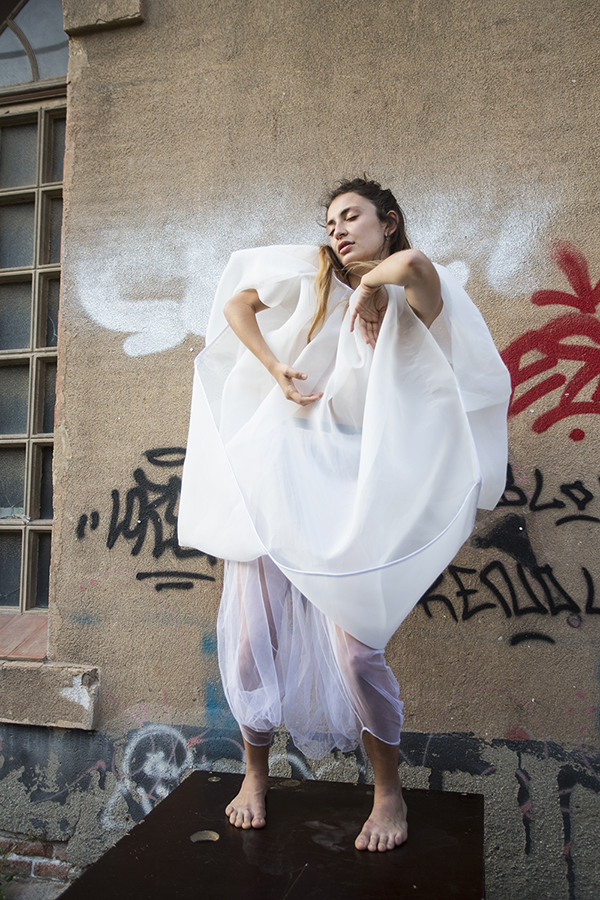 The beer bar created by Sociedad 0 out of modular shelves, reveals the different elements that make up the service process in a bar, making visible what is usually not seen in conventional bars. The dancers, choreographed by Aimar Pérez-Gal·lí, climb the platforms to become objectified. They are dressed in Bags, the pieces designed by Albec Bunsen from woven silk screens with a pattern that does not generate cuts. Takk has baptised their creation Moon. It is a strange golden creature that spits smoke all night from within. Made with materials coupled with craft techniques, I can not avoid associating it with an elephant. An association reinforced by the silver fan that is attached to the shoulder and that rotates incessantly as if it was a vital organ. 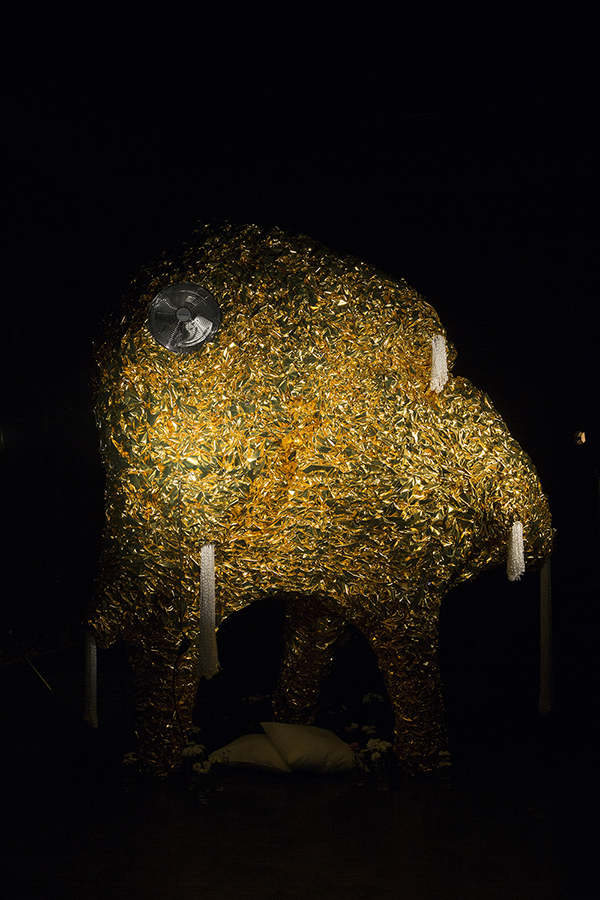 Even the musical environment Useful Waste Bootlegs, created by Drakis Barcelona (djs Ulldeter + Julieta Ferrari), is a new composition based on recycled sounds: illegal recordings of songs or parts that have been discarded by musicians. Everyone pauses in front of the majesty of Dolmen, the sculpture made with recycled newspaper of Ana Domínguez that imitates a megalithic construction and that, seen from a distance, reveals itself as a still life of potatoes on a gigantic scale.

Outside the ship, Atlas by Cristian Herrera divides the territory and makes us participants of its particular geography. Resting on a modular metal structure, the skin of this balloon that has exhausted its useful life and that previously protected us from the afternoon sun, forces us to bend down to reach the desired bar, making us more aware of how objects make us subjects.

It is exactly at the bar, while I wait to a beer to help me digest the strange spectacle that surrounds me, when I realize that objects can have all the lives that we as subjects are capable of imagining. If these objects begin to accumulate without control and in disuse, it means that we, the subjects that are capable of giving them life, have also died in some way. 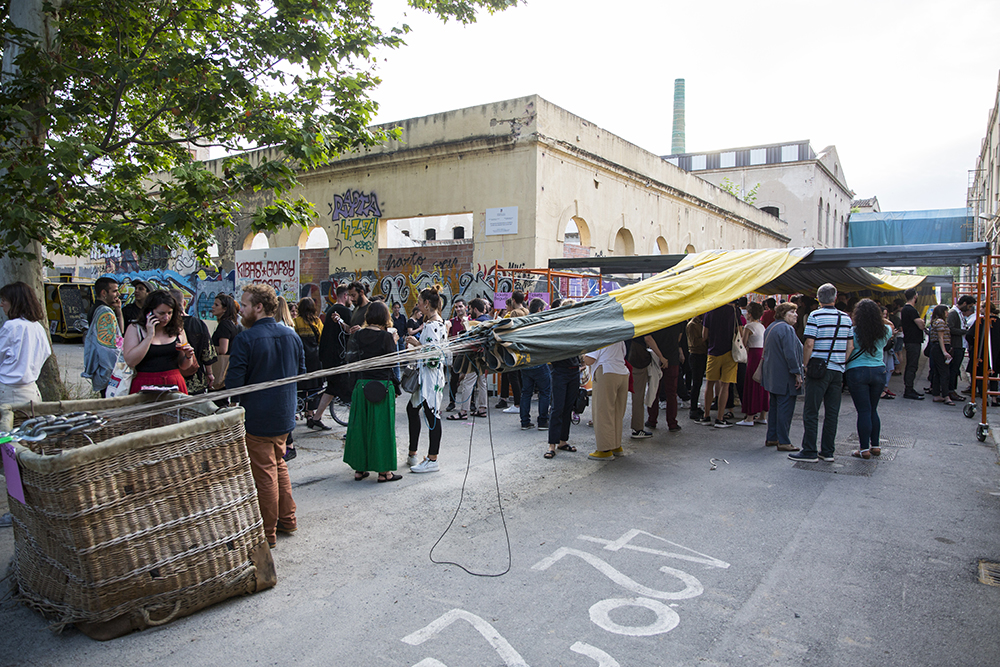 All these artists, curated by the artist David Bestué and the architects Miquel Mariné and Moisés Puente, have demonstrated not only the vitality of the objects of this particular still life, but also their vitality as creators, thus demonstrating the possibility of any subject to become an agent of change. Certainly, the collection of materials and objects in action was not particularly sophisticated: old t-shirts, newspaper, magazines, silkscreen screen fabrics, metallic structures, deflated balloons, etc. but that was not the purpose. The aim of this still life was to point to the intimate relationship of objects with subjects, the only ones capable of making them mutate, rebel and adopt new lives that will not endanger our existence or their own.

As the philosopher Rosi Braidotti recalls: “We are all in this together”: we, the natural world we are part of and the objects that we have created to relate to this world. But amongst all, we are in this together at the same level, not us on top of everything else. And if we keep conceiving the world and the objects we create under a perspective of domination, the rebellion will be inevitable and its consequences apocalyptic.